Service Fee: Sadly, due to complications from laminitis, on vet advice Flying Star was put down in April 2007. His last foals will be born this year.

Flying Star won the working 3 year old at the National Championships at Condobolin as a 2 year old.

In 1998, he won the working class under 4 years and placed third in the open working stallion at Canberra Royal.

At the Hunter Branch Show in 1999 he won the 3 year old Snaffle Bit Futurity and was the Junior High Point horse of the Show. He was also fifth overall in the National Futurity at the Championships held at Tamworth.

At the National Championships held at Hawkesbury in 2000, he won the Time Trial section of the Maturity, the working colt 4 year old and the Champion working 4 year old.

Flying Star wBoorie Creek Flying Staras second in the stallion draft at the National Championships held at Albury in 2005. He also placed third in the Open Challenge.

Flying Star has become a novice campdrafter after multiple placings in maiden, novice and open drafts. He is campdrafted by Colin Parkinson.

His oldest progeny are going well. They show their sire’s ability and keenness to learn. Rosebrook Lancer was named the 2006 Ladies Rookie polocrosse for NSW after his first successful season.

At the 2007 Sydney Royal Flying Star won the time trial by over 10 seconds from the next placegetter and was second in the station horse. He was part of the Rosebrook team who competed in the Teams Draft in the main arena winning this event for the second year in succession. 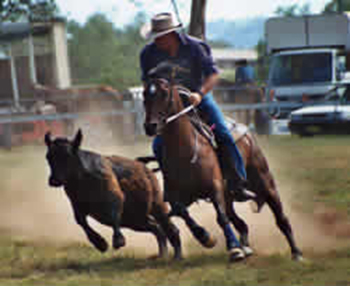