Rosebrook Balou is a very successful horse, both as a sire and as a performance horse. His sire, Rosebrook Abou, I have given details about in the profile on Rosebrook Shantung.

Rosebrook Balou has been most successful in the show ring winning led, hack and working classes. He has also won a maiden campdraft and has been placed on many occasions. The day he won the maiden campdraft he also won the Champion Led Stock Horse and the Champion Open Working Horse. His performances include fifth in the National Maturity at Tamworth. At the same event he won the 4 year old Led stallion, 4 year old hack and the working 4 year old under 3 different judges. At numerous shows he has won both the led and working classes. At the 1999 Canberra Show he won the Working Stallion. In the same year at Sydney Show he won the Led Stallion and the Working Stallion classes and was Reserve Champion Working Horse.

Rosebrook Balou excelled in Time Trial events and was the only horse to go under 50 seconds at the National Championships at Scone in 2001.

He has an excellent temperament, is a top walking horse and is a pleasure to ride. He was at the Official Opening of the Heritage Horse Ride at the Sydney Opera House and was also in the Welcome Segment of the Opening Ceremony of the Sydney Olympics.

Rosebrook Balou’s progeny are campdrafting and performing well in the showring.

Rosebrook Sterling, ridden by Colin Parkinson, has played polocrosse for NSW winning the Champion Mens ASH at the Shell Cup at Warwick in 2006 and was Champion Horse of the Series in the polocrosse at the 2007 Sydney Show. He was also the NSW Open Mens Horse for polocrosse for 2006 in the ASH awards. Sterling is also a novice campdrafter. In 2008 Sterling won the best horse and rider combination at the Shell Cup at Warwick and then travelled to Perth to play in the Senior mixed team. At the Ballarat Nationals he was played by Simon Parkinson for the Northern Territory. He won the champion under 21 ASH. He then went on to play at Warwick Nationals in 2012. During this time he also won champion horse at Sydney Show twice and many horse awards at club and zone level. He spent last season being played by Brittany Parkinson in Juniors. In 2014 he again represented NSW at Warwick in the junior girl’s competition.

Rosebrook Mika is a very successful stallion for Don, Jenny and Ben Turner in Tasmania. Mika has won all major awards at their Stock Horse and Agricultural Shows. He is also campdrafting for them. His progeny are performing well in many areas of competition.

Rosebrook Ferrari has won many Champion and Supreme Led and Ridden awards. She was the Supreme Led Exhibit at the ASH National Championships held at Warwick in2006. Rosebrook Ferrari was played by Brandon Parkinson for NSW at the Perth Nationals. Ferrari won many awards in her polocrosse career. She has been retired to stud.

Rosebrook Harmony is a champion polocrosse mare. She was purchased by Charlie and Sara Grills who broke her in and trained her. Harmony was also lightly drafted. Harmony was played by Abbott Grills at club and zone level. Harmony played in the NSW junior boys team at Darwin Nationals.

Rosebrook Sequence is a full sister to Rosebrook Sterling. She was shown very successfully at Royal and National level. She won Champion three year old hack at Warwick Nationals in 2006. She also won many led, hack and working classes before joining the polocrosse string. Sequence won two champion horse awards and many positional prizes before being retired to stud.

Rosebrook Conchita was played by the US Captain Robbie Shuttles at the 2007 Polocrosse World Cup held at Warwick. She was awarded the Champion Division 4 Mens ASH. Conchita won many awards at polocrosse when being played by Brandon Parkinson. She was played at Ballarat Nationals in 2010 in the winning junior mixed team and then a month later won the champion junior horse and rider combination at Warwick. Conchita was retired to stud after the Warwick Nationals.

Roseridge Mary Lou has been an extremely successful polocrosse mare for Noel Semmens in Victoria. She won many awards and played at several Nationals before being retired to stud. 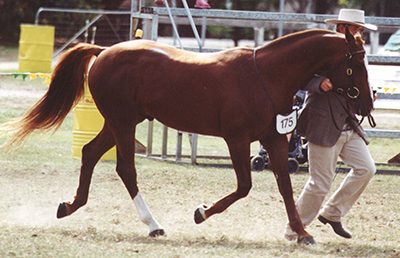